In any event, keep in mind that the ice creams on this list are all subjective to different concepts and points of view. As a result, none of the rankings can be guaranteed to be accurate. All of the ice cream tiers were chosen after careful research of various ice cream companies, their flavors, and the ingredients used in the making of that ice cream.

Furthermore, the tier ranking takes into account the preferences of dairy-free ice cream aficionados, low-carb ice cream fans, and many other ice cream reviewers. Our crew also tasted all of the ice creams listed below to see which ones are the greatest and which ones aren’t.

Moreover, it is the best snack to give to your friends on their bad days as Tryptophan, one of the amino acids found in ice cream has been shown to boost serotonin synthesis. However, you must make sure to give them a tasty flavor as a terrible ice cream flavor can turn them down even more.

Vanilla ice cream is an addiction especially when it is from Haagen Daz. Haagen-Daz has the best vanilla ice cream on this planet. That is because the way it melts in the mouth just makes you want to have it more and more. With that said, there is no way you can ever get bored of it.

In the entire ice cream rankings, no one can beat Haagen Dazs Vanilla ice cream. The ice cream has a classic taste with a soft, creamy texture that would remind you of your childhood.

In this type of ice cream, the coffee core is precisely what you would expect. It has a smooth and sweet flavor with vanilla undertones and a mildly bitter coffee flavor. Furthermore, even after numerous bites into the creamy darkness, the taste does not diminish.

It never truly turns creamy, but it has a pleasant flavor. The big portions of cookie dough and chocolate flakes will delight you. In the Ice cream snacks tier list, the Oreo ice cream sandwich definitely comes on the top.

Bucky’s alma mater, the University of Wisconsin at Madison, wanted to develop a taste that he would be proud of. Something that would appeal to students, alumni, friends, and family. So they mixed chocolate and caramel sauces with crispy chocolate bits in their favorite vanilla ice cream to create a taste that only a Badger would like. Schoep’s Badger track is the best in the Badger ice cream tier list.

The Badger Track ice cream has a silky, smooth texture with bitter dark chocolate chips that offer a little crunch and bitterness that I enjoy. When you take a bite of ice cream and it slides down your throat, it tastes so good and is so cold that you want to eat more. It’s a very delicate white cream color with brown chocolate pieces and caramel stripes. 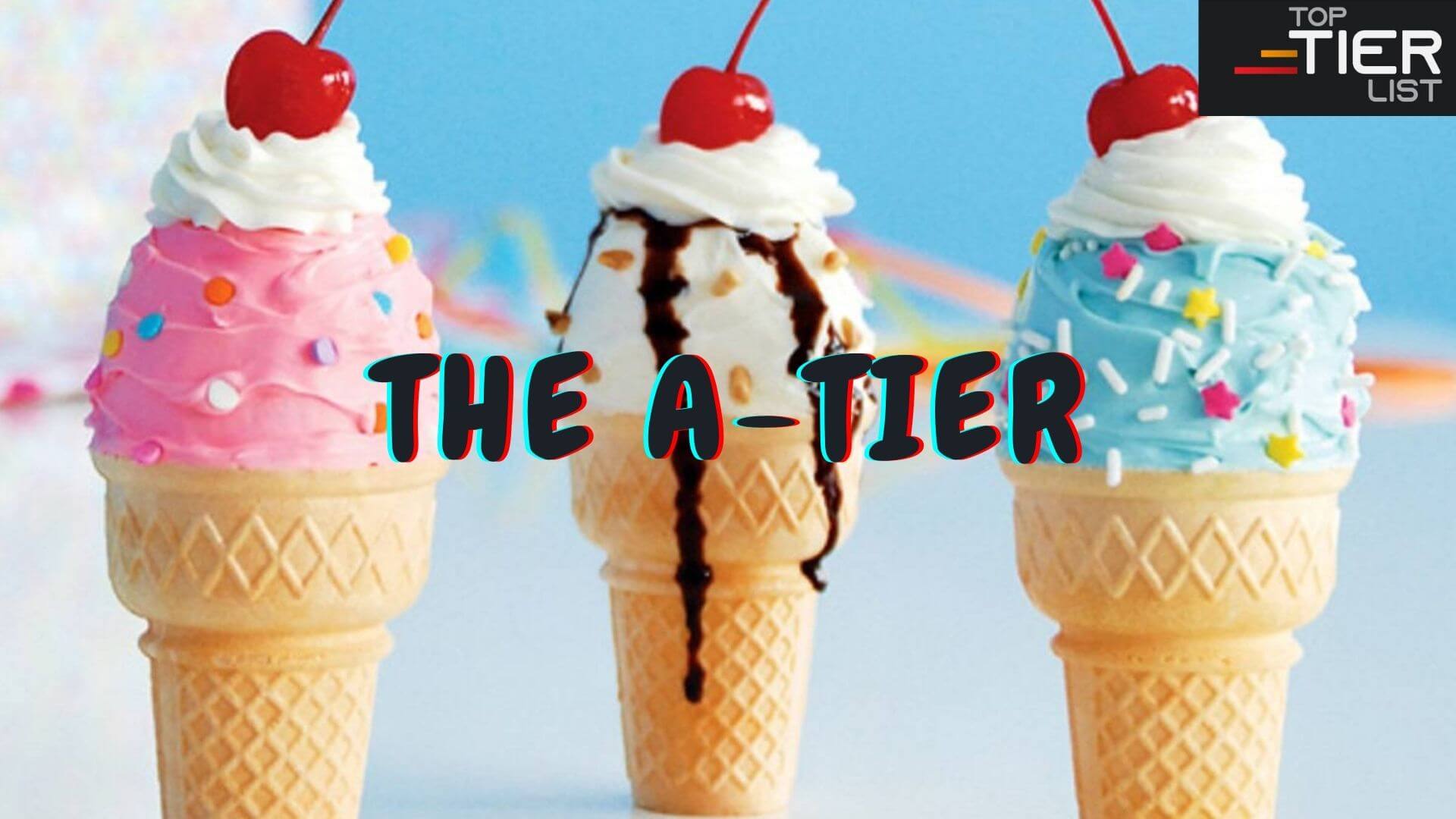 A Tier also contains one of the best ice cream flavors ever. It is just that these are not as perfect as the ones in the S Tier. Nevertheless, these are still very good ice creams, which will leave you wanting more of them.

Be careful while consuming these ice creams, as they can be very addictive, and too much ice cream is not good for health even if it has low calories. Anyhow, here are some really good ice creams that you must try out once in your life. In Ice cream rankings, these are without any doubt Tier ice creams.

Moreover, the chocolate chunks give just the right amount of texture. The Badger Blast is a delectable ice cream made with premium ingredients and rich tastes. This aromatic ice cream is definitely worth a shot

Haagen Daz always has the best Strawberry ice cream ever. This classic ice cream is made by combining luscious summer strawberries with pure cream. The natural flavor of our strawberries shines through since it is packed with real fruit.

They utilize organic milk and strawberries, so you know the product is top-notch. It also has a creaminess to it that complements the strawberry flavor. It’s difficult not to eat the entire container of this one all at once.

Since 1870, Graeter’s has been a family-owned business, and it is the last ice cream maker still using French pots. The Dutch Milk Chocolate is prepared with the best cocoa available in Europe, giving it a distinct milk chocolate flavor. Moreover, Graeter’s ice cream has just the proper amount of chocolate flavor without being overpowering. Also, it has that smooth texture we love in ice cream.

Some testers thought the ice cream was a little too sweet and tasted like coconut, but the majority of them liked the ice cream’s well-balanced flavor. Graeter’s Dutch Milk Chocolate is definitely one of the best chocolate ice creams on the ice cream snack tier list.

The B Tier ice creams are either greatly hated or deeply loved. While some people complain that these ice creams are not suitable for their tastes, others absolutely love them.

These ice creams are really good but they do not have anything that makes them special or makes them stand out. Nevertheless, our team really liked all the ice cream flavors given below in the B Tier of this ice cream tier list. Let us know what ice creams you like from these ones in the comments.

The creamy richness hides and complements the intense coconut flavor. Many others, however, dislike the concept of combining coconut with chocolate cookie dough. As a result, opinions on this dairy-free ice cream fluctuate greatly.

Monk fruit, Stevia, and Erythritol are used to sweeten the ice cream. With this ice cream, there will almost certainly be no blood sugar casualties. Sea Salt Caramel from Keto Pint Ice Cream is the best low-carb ice cream to exist

The vanilla ice cream base was quite basic. It is, nevertheless, a strong performer, flavorful, and somewhat creamy. The caramel, on the other hand, was delicious and oozy. Moreover, it is nowhere as sweet as other caramel ice creams or the best vanilla ice creams out there.

Also, the ice cream is not as intense because of the third ingredient, which is the praline pecans. The lack of overpowering sweetness is nice to some and terrible for others. The sugary-sweet candied coated nuts have a lot of crunches. The taste is not really bad, but it is indeed very forgettable.

Given the significant demand for dairy-free ice cream bases, the usage of this milk is well appreciated by the brand’s fans. Moreover, Vegan Chocolate Fudge Brownie is insanely creamy and actually tastes like real ice cream. It is almost impossible to figure out whether it’s dairy-free or not.

The C Tier ice creams are not bad but there is nothing really special about these ice creams. The taste of these ice creams is quite bland which makes them forgetful. While the taste is satisfactory, there are other good alternatives to the ice cream flavors ranked in the C Tier of this ice cream snacks tier list. Anyways, here are all the below-average ice creams from some popular ice cream brands.

The flavor, Old Fashioned Butter Pecan, is perfectly fine. However, it is just that it lacks the taste that would make it special. It is not a unique taste and the flavor can easily get you bored of it. The ice cream is overly simple and just bland. Butter-roasted pecans are included in the butter pecan flavor ice cream.

Strawberry shortcake bar is far from the best in the ice cream truck tier list. These pink bars include light-colored cake chunks mixed in with what appear to be pink sparkly sprinkles. A thin coating of vanilla ice cream surrounds the vibrant pink strawberry core as you sink your teeth into it. The silky, creamy texture of the ice cream and the strawberry filling are both appealing.

However, that is all there is to it. Unfortunately, the texture of the ice cream, the filling, and the coating are all quite similar. Because the name indicates a crunch, you’ll probably anticipate a little amount of it. Nevertheless, you’ll end up with a crumb-like texture that’s devoid of flavor.

Mammoth Creameries is a supposedly, low-carb ice cream. However, it is not one of the best low Carb ice creams to exist. Instead, it is pretty much disliked by the ice cream fans. It is extremely crumbly, and the texture is not even close to what you would expect from ice cream.

If you are counting calories, keep in mind that this is one of the most calorie-dense Low Carb Ice Creams. While the taste is satisfactory, there are better low-carb ice creams as alternatives for this one.

Obviously, not every ice cream has the same taste. Even though the flavors are the same, ice cream from a certain brand will taste somewhat different from another ice cream brand. Many times it will taste worse than ice creams from other brands.

The distinction is in the quality of the components. For example, if they are of poor quality, they will often taste cheap. Therefore, here are some flavors from particular brands and ice cream flavors that taste terrible.

Rocky Road flavor is one of the most disliked ice cream flavors. It is a classic chocolate ice cream with crispy almonds and chewy marshmallows in small pieces. The reason for its widespread dislike is that most people dislike their marshmallows becoming frozen due to the cold. Even from the best ice cream brands, Rocky Road is just not what you would like to eat.

Anyhow, even the inclusion of bubblegum bits would not actually make it any better at all. Unfortunately, the bubblegum ice cream is inedible and is among the worst flavors available at Baskin Robbins.

Coconut For Caramel – Ben and Jerry’s

In Ben and Jerry’s flavor list, Coconut for Caramel has to be the worst B&Js ice cream flavor ever. It does not really taste bad or terrible, it is just too unhealthy for ice cream. While Ben and Jerry’s are known to have twice as many calories as normal ice creams, this one just tops every ice cream ever.

There is no way you can eat more than two spoonfuls of it as it is way too sweet. You definitely should never buy it unless you do not care at all about your health. Moreover, there are way better alternatives than eating this particular ice cream flavor.

Also, once again, please bear in mind that the rankings of the ice creams may not be to your liking as everyone has different tastebuds and preferences. We in no way claim any of these rankings to be a fact.