There are many reasons for a game to get canceled, and fans never get to see them. One of them is that, At times, the game is not fun, and Blizzard is a fine example of a company. If it doesn’t meet its high standards, they tend to cancel the game.

Likewise, making a AAA game is not an easy task It takes a team of hundreds of people, and if the management is poor, the game will most likely get delayed if not canceled.

Here are the 10 games that got canceled right under our nose.

In 2015 artist named Romeo Costan revealed their work that indicated Ubisoft is developing a game set in Asia. It could have been the original version of Ubisoft’s upcoming game Skull & Bones, which would have been canceled in favor of the understanding that we now know and that, it seems, we will get to play. 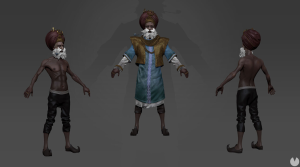 This illustration is by a veteran Microsoft artist Sasha Beliaev who worked at Microsoft. He claims that this belongs to the reboot of the Age of Empire and made clear that before the age of Empire 4, the series was about to receive a reboot taking into the account that the fourth installment made a debut in 2021 and in addition to the fact that he worked at Microsoft between 2010-2014. It seems clear that it is a different canceled project than we played.

The climax is another AAA game that didn’t come out. Thanks to the creator of the illustrations, César Espejo, we know that this is a triple-A, and beyond its medieval setting, there is not much to conclude. Can you think of any existing SAGA it could fit into?

Bloodrayne is a Media Franchise that originated with an action-adventure video game series developed by Terminal Reality and published by Majesco Entertainment which began with the game Bloodrayne in 2002 with fans globally. The franchise focuses on Rayne working in brimstone society, a secret band of individuals who works to protect humanity from supernatural threats.

The seven years between the second installment and the third, which went two-dimension, probably reduced its budget, which shows that sales were not excellent. Later it was announced that the 4th title was in development but was put on hold due to low sales of the 3rd installment, and after it got canceled.

There is not much information regarding this game beyond Dan Volbert’s illustrations, but we know it was in development at Crytek around 2008-to and 2010. As can be seen, it involves at least one underwater Roman city. It is possible that this was an idea to build on the work done for the game that would later become Ryse: Son of Rome, or this might be an experiment for Virtual reality. The game was in development for a long time and went through many stages.

Halo is a military science fiction game made by Bungie; the play centers on an interstellar war between humanity and an alliance of aliens known as the covenant; one of our most exciting discoveries is this canceled Halo. Also, from Sasha Beliaev, there are no more details about it except that it is a Microsoft project between 2010 and 2014 which we never got to see; one of the illustrations has a small message on it that says “HALO v005”, so it might be an early version of Halo 5: Guardians.

Game Set to be in Egypt By Beenox

Beenox, before being absorbed by Activision’s Call Of Duty machinery, was a team that worked on their games and even left us several games based on Spider-Man like Spider-Man: Shattered Dimension or Both the Amazing Spider-Man just during this time Beenox was working on a project that we know absolutely nothing. Still, we have managed to rescue this illustration by Hugo Puzzuoli.

Another completely unknown title, starring Batman. Designed by Jared Marantz, who has worked on many superheroes and villain designs for film, television, and other video games, we can see BatMan, Parasite, Bizarro, and King Shark illustrations. We don’t know the publisher or developer, but the design suggests that it could be Damien Wayne-focused, judging by the futuristic look of the artwork.

These two illustrations, which come from the hand of Brian McClain, are from an unknown horror game, and this is all we know about it; we know that Brian was recently working at Nexon OC (a studio that closed its doors a couple of years ago), so it could be one of the projects they had going on.

Do you remember Wonderbook? Sony’s “magic books” using augmented reality? If we don’t forget any, four books were released, but there was at least one more in the works, which also had a pretty tasty license: Toy Story. Thanks to Peter Lumby, we have a few scenarios we have visited in this adventure if we reached the stores; we assume that the sales of previous titles were not very good, which caused this to be canceled in the middle of its development in 2013.

Let us know your opinion on this in the comments down below!