Genshin Impact is one of the most popular gacha games, primarily because it is very free-to-play friendly and does not require you to spend endless money to complete the game. The animation is very similar to an anime, hence why it is so successful in the anime and gaming communities.

Aside from the unique and tactical combat mechanics, Genshin Impact offers the players some amazing stories. Although the pacing is a big issue, it’s been looking great due to the great reveals miHoYo has done recently.

Currently, we are on patch 2.8 of the game, and it seems like we will finally be able to witness some dendro action in our party in the next patch. Moreover, we will also be seeing the two new artifact sets tailored towards dendro characters, and let’s just say that they look fantastic.

First, we have the Ornamental Gold Dream; the design looks very much “Egyptian”, and it feels like it will be the signature artifact of Cyno, as he is the only character with the most Egyptian look. It is also possible to be more general, like Shimenawa’s Reminiscence or Emblem of Severed Fates.

Shimenawa set was for Yoimiya but now has become great for others like Hu Tao; the same is for the Emblem set, which was for Raiden/El, but is now best in the slot for many others. Regardless, we will discuss that further after looking at the set bonuses. 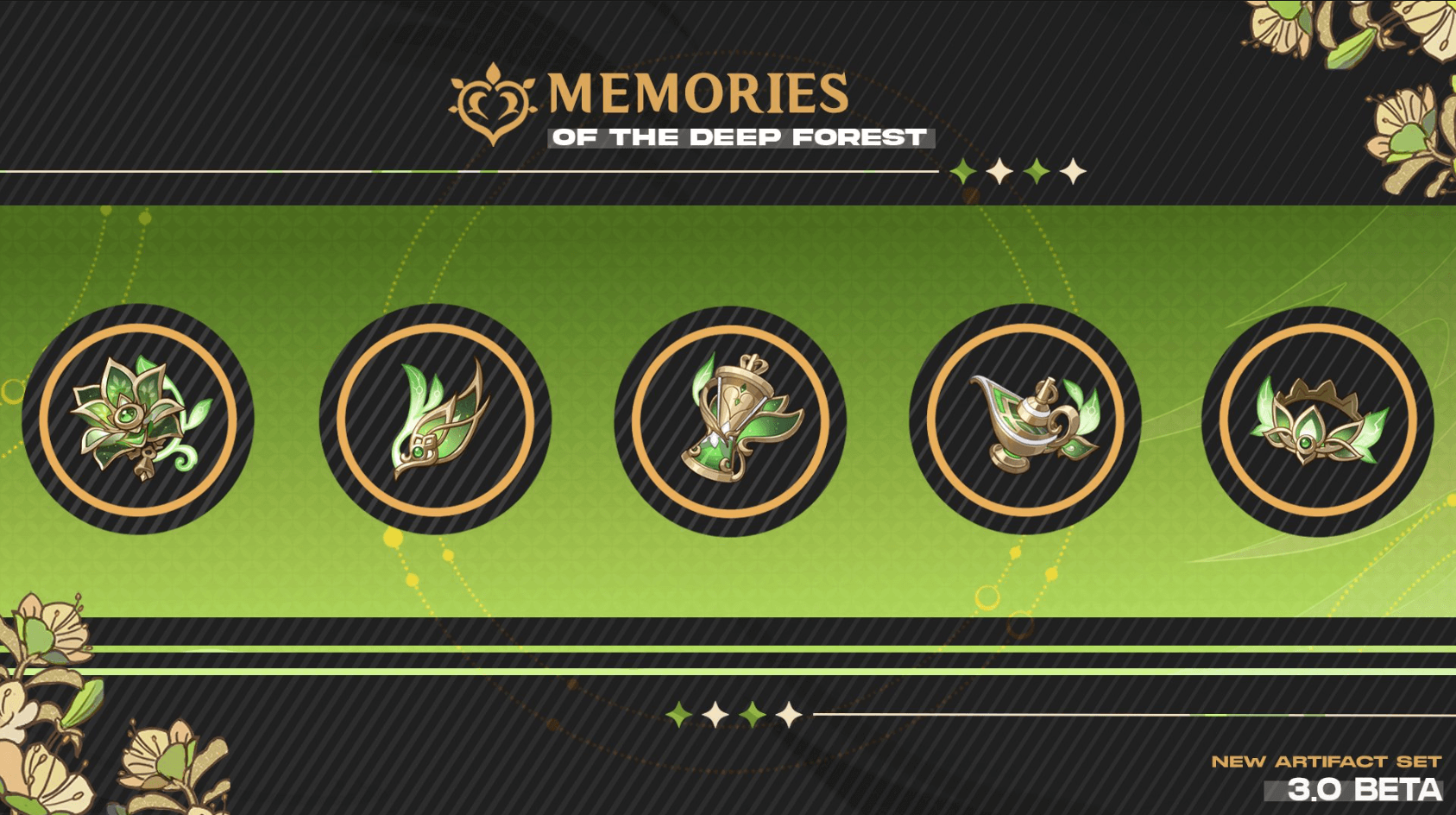 It looks great and matches the Sumeru aesthetic, but one big concern is whether we will see them in 3.0, as there is a strong possibility we will get two dendro characters before that. They may also introduce 3.0 directly after 2.8, but we can’t say for sure without an official announcement.

The set bonuses are interesting and give us the main stat theme of Sumeru, which is elemental mastery. We know that Inazuma showed us the importance of energy recharge, and many of the characters benefitted from that stat, and now EM seems like the focus for dendro.

Memories of the Deep Forest:

4 piece – When the enemy receives elemental DMG, Dendro RES is reduced by 25% for 8 seconds. It can trigger when the damage-dealing character is off-field.

This set is more general, it is a great option for all dendro characters, especially off-field, and this might also be used on support characters. It does not specify which elemental DMG the enemy takes, meaning the enemy can take any elemental DMG, and it will have a 25% dendro resistance shred.

So, we might see a big meta shift once Sumeru is out, so it’s better to save that fragile resin once these come out because who knows how many you will need.

The main focus of this artifact is on elemental mastery, and since dendro characters will benefit a lot from it, it will be interesting to see it being used on them. Since the values are not shown precisely, we can’t say how good they will be, but you can still farm for them for fun since it won’t take long to get bored in the endgame.

The values or bonuses are subjected to change; while it is unlikely, they can change them as they did with Noblesse Oblige set, which used to give Crit DMG, and now it gives Burst DMG.

That is all from us; let us know your thoughts on them and who they will be suitable for among the future characters. If you love playing Genshin Impact, scroll down as you can find all the news on it and much more!

After years of allegations of misconduct/harassment in workplace, Blizzard Entertainment finally took initiative by hiring a new DEI Team.

Sony has been venturing into Spain and China to push its console sales, but its next target seems to be in India.

Due to the failure to comply with Sony’s policy regarding Game Demos on PlayStation Premium, it is likely never happening.

The controversial Nilfgaardian Armor Aka The ‘Ball-sack’ Armor has been added in the new Witcher 3 Next-Gen Update.

Sony plans to expand its roots in the Chinese gaming industry with more exclusives and plans on doubling console sales in China.

According to a recent tweet, Senua’s Saga: Hellblade II has finished doing the Motion Capture, showing good signs of development.

Just Dance 2023 Edition came out on the 22nd of November, with a significant discount of saving $20 on Target and Best Buy.

This League Of Legends Twisted Treeline Tier List ranks all Champions in the patch 10.8 from best to worst so, that players can win easily.

The characters of a mobile role-playing game are ranked in Valkyrie Anatomia tier list. Make sure to take a look at it.

Anime Journey Tier List has discreetly characterized the classes keeping in view their skills, capabilities, and expertise at competence.